Tech stocks have gotten hammered over the past few months, weighed down by investor fears of rising inflation and interest rates. While those headwinds will impact some tech companies, many still have nearly unstoppable growth potential.

Three beaten-down tech stocks with enormous growth potential are chewy ( CHWY 3.89% ), Paycom Software ( PAYC 3.43% ), roku ( ROKU 3.34% ). Investors with $3,000 to spare should consider using that cash to load up on these high upside opportunities.

Getting its paws on an enormous market opportunity

Chewy’s stock has been in the doghouse over the past year. Shares of the online pet products and services company have shed more than 60% of their peak value. That slump comes despite Chewy’s rapid growth. 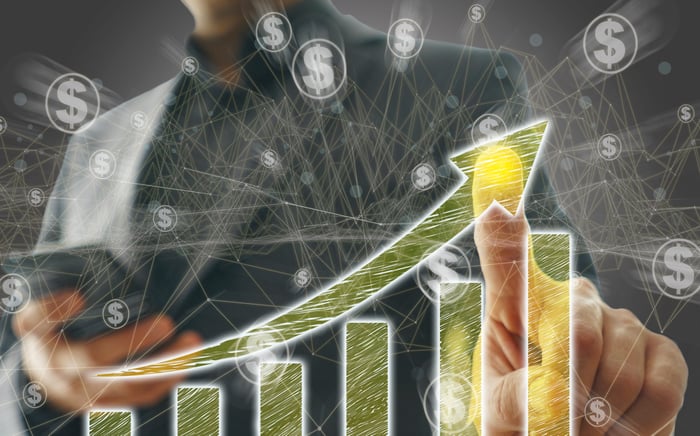 Chewy has enormous growth potential. The $100 billion pet food market is expanding at a healthy clip — Packaged Facts sees sales growing at a 6.6% annual rate through 2025 — while pet owners continue to shift more of their purchases online. By 2025, online sales will make up 55% of the overall pet food market, up from 37% in 2021.

Meanwhile, Chewy is extending its reach. It recently expanded its pet telehealth service, started offering pet insurance, and launched a marketplace for vets. It also has set its sights on expanding into non-vet services (eg, pet sitting and dog walking) and internationally. With a growing core market and lots of optionality, Chewy seems almost unstoppable.

A small slice of a massive market

Paycom has tumbled 40% from its recent peak. The sell-off in the payroll and HR solution’s company comes even though it continues to grow at an explosive pace. Revenue surged 25.4% in 2021 to more than $1.05 billion. The company is expanding its customer count — clients grew 9% to nearly 34,000 — and deepening its relationships with existing customers through continued product innovation. Paycom’s latest product, BETI, enables employees to process their own payroll. That new way of doing payroll is helping eliminate errors while giving employees more insight into their pay.

Paycom is only scratching the surface of its market opportunity. Currently, the cloud-based software provider has around 5% of a large and growing market. The company continues to take steps to grab more of this market, including recently increasing its customer target to those with up to 10,000 employees. It’s also investing heavily in sales, marketing, and product innovation to continue expanding its market share and opportunity set.

Plugged into the streaming revolution

Roku’s stock has cratered more than 75% from its recent high. That shellacking came even though the leader in streaming to the TV has continued to expand its user base and revenue per user.

Roku is still in the early days of capturing the massive global opportunity in streaming. While it’s a leader in making streaming players, the big money opportunity is in its streaming platform. More users are spending more time streaming content on its platform. That’s making the company’s platform more valuable to content providers and advertisers, which are increasingly spending money to target Roku’s highly engaged users. competition between streaming services providers is heading up, leading them to use Roku’s marketing tools to tap into its vast and growing user base.

Meanwhile, traditional TV advertisers are increasingly shifting their spending to streaming while new advertisers are taking advantage of Roku’s data and tools to target potential customers. The continued shift by content publishers and advertisers toward streaming should drive significant revenue growth for Roku’s platform in the years ahead.

There’s no question that the market bid up tech stocks to unjustifiable valuations in the past year. However, that pendulum seems to have swung too far in the other direction. Investors can scoop up shares of companies with seemingly unstoppable growth potential for much lower prices these days. So, if you have a few thousand dollars to spare, it now looks like a great time to load up on Chewy, Paycom, and Roku, given the enormous amount of growth that still lies ahead.

This article represents the opinion of the writer, who may disagree with the “official” recommendation position of a Motley Fool premium advisory service. We’re motley! Questioning an investing thesis – even one of our own – helps us all think critically about investing and make decisions that help us become smarter, happier, and richer.