With the rise of pets being purchased during the pandemic – keeping your furry friends healthy is becoming increasingly more expensive.

Appearing on Good Morning Britain today, two guests argued whether we should be treating our furry friends more like people and investing in an NHS for animals to save pet owners thousands of pounds.

Author and journalist Liz Jones, who featured via video link with adorable dog Minnie, argued there should be free healthcare for animals who are like ‘family’ to lonely people, while Peter Purves, who has five dogs, argued if you can’t afford to keep a pet, then don’t get one.

‘While I agree vets bills are terribly expensive, I think they’re over-expensive,’ said Peter. ‘We’ve had dogs having operations costing well over £40000 each, and we’ve had at least four of those in the last four years, but having a dog is a personal choice and that’s one of the things you have to factor in when you have a pet.’ 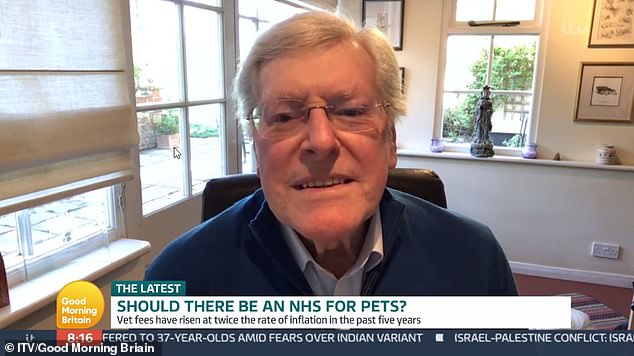 Peter Purves (pictured), who has five dogs, argued if you can’t afford to keep a pet, then don’t get one 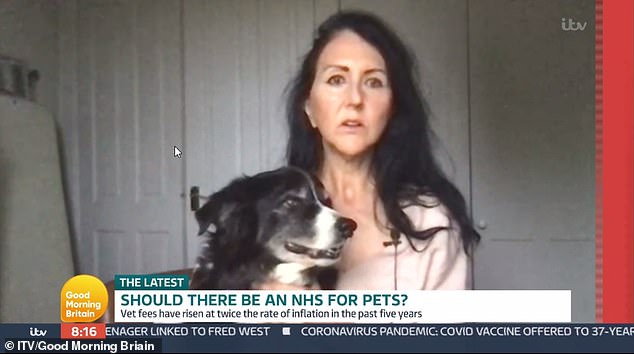 Author and journalist Liz Jones, who featured via video link with adorable dog Minnie, argued that NHS for pets is a great idea (pictured)

Taking to the comments section, one person penned: ‘Ludicrous – of course it’s emotional as if having children. The charges are absolutely scandalous! Who can afford 5-6 children but people still have them. I’m with Liz on this’ (pictured)

He continued: ‘I’ve kept dogs since I left Blue Peter over forty years ago,’ he said. ‘I suppose I can’t have spent less than £40,000 on vet bills.’

Presenter Susanna Reid asked: ‘But you are more than happy to pay £40,000?’ to which Peter replied: ‘Don’t get me wrong, I’m not happy about it at all. I do believe vet bills are extremely high.

‘You pay for a lot of skill and it is very heavy going on the pocket. Some of my dogs have been insured and others have not. Those that haven’t, I’ve thought they’re well enough for me to self-insure then, if they’re ill, we’ll save it ourselves and then pay from that, but it’s worked out very expensive.’

In contrast, Liz argued the government should create an NHS for pets.

‘It’s been proven over the last year that pets do so much for our health,’ she explained. ‘You’re much fitter because you walk a dog. Think of all the lonely old women who have got a cat and that cat is the only company they’ve had in the last year. They’re members of our society.’

She continued: ‘I pay taxes. I pay for other people to have children, but no one contributes towards our animals. 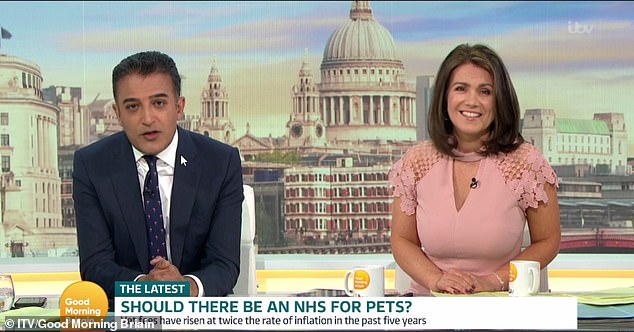 Presenter Susanna Reid (pictured, right) explained that vet fees have risen at twice the rate of inflation in the past five years 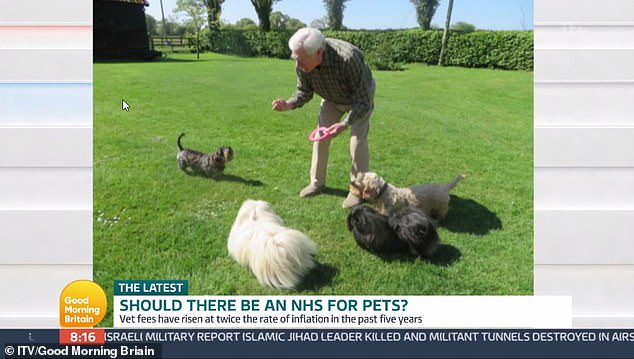 Peter Purves (pictured), who has five dogs, argued if you can’t afford to keep a pet, then don’t get one

‘I wrote yesterday that vets are charging three times what you would pay in an online pharmacy for common drugs. I had one comment from a reader saying a scan she paid for a dog which cost £3000, would be £750 for the human equivalent. So why are we charging double what it would cost to treat a human?’

She continued: ‘My dogs are my babies and my family and I love them. They are part of society and they do so much for us. You might say insure your pets, but when you’ve got a lot of dogs insurance is very expensive and so much is excluded.

‘When your animals are old, I’ve got a very old pony, he’s almost 30, he’s un-insurable. You can’t insure him.’

Susanna went on to say that for many people, pets are their children and that if Liz had as many children as they did pets, and they got sick, all of those costs would be supported by the state. But she’s in a different situation and therefore, she’s financially penalized.

‘I suggest that’s on an emotional level rather than a practical level,’ said Peter. ‘I don’t think the nation would accept the fact of paying extra for an animal NHS if you want to call it that.

It certainly couldn’t come out of the current NHS because they’re struggling as it is, it’s not practical.’

Taking to the comments section, one person argued: ‘Totally agree vets are way to expensive but also insurance should be cheaper The government should do something about this as animals really help lonely people’ (pictured)

Liz went on to argue that people have a choice whether to have children or not – it’s a lifestyle choice.

‘I pay for people to have maternity leave, school, education. I think what Peter’s been saying, I think Petra would be saying she would be turning in her seriousness. As a child, I loved that dog. She meant so much to me.

My biggest point in this is that we pay 20% VAT on every vet bill. Why are we paying VAT on vet bills. We don’t pay VAT on bacon?’

And many people agreed, with one writing: ‘I completely agree with this woman, my dogs are my children and my personal choice was not to have kids just as my sister or my friends chose to have kids!’

A second commented: ‘Ludicrous – of course it’s emotional as if having children. The charges are absolutely scandalous! Who can afford 5-6 children but people still have them. I’m with Liz on this’, while a third argued:

‘Totally agree vets are way to expensive but also insurance should be cheaper The government should do something about this as animals really help lonely people.’