Have YOU had a problem with RAC or a breakdown service?

Furious drivers today slammed the RAC for leaving them waiting up to eight hours for recovery and even advising them to call police to take them home instead – with delays still being blamed on Covid.

Despite its promise to rescue members within an hour, one 66-year-old pensioner was left by the side of a ‘freezing’ motorway for four hours with her two dogs while a beauty therapist, 26, had to wait overnight on a dingy Glasgow street.

Both customers were lone women in vulnerable situations – but said RAC staff were not receptive to their concerns and told them delays were ‘because of Covid’.

Meanwhile, Coronavirus infection rates have plummeted by more than a third on last week and Boris Johnson is urging Britain to ‘get back to normal’ ahead of ‘Covid Freedom Day’ on Thursday.

Case rates reported by the UK Health Security Agency on Sunday fell by 37 per cent on last week to 25,696 cases – the lowest figure since August last year. All curbs – including legal self-isolation – are set to end in England within days.

It comes as companies across the country are being roundly criticized for continuing to blame the Covid pandemic – now in retreat – for slow response times or substandard services. 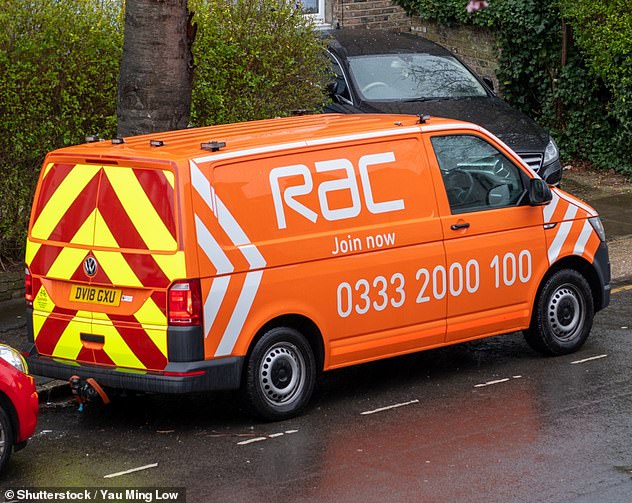 Drivers today complained of experiencing long delays to rescues by the RAC, which together with the AA is sometimes known as Britain’s ‘fourth emergency service’

The AA last month provoked fury as it said it was no longer prioritizing calls out based on gender, although the RAC today insisted it would still take this into consideration in relevant situations.

‘I first got in touch with the RAC at 11:35am,’ she said. ‘I then had messages saying ”please bear in mind that the pandemic continues to disrupt our services”, but then at 12:20 I got a call saying someone would be dispatched.

‘At 1pm I spoke to a RAC employee, Michael, who said he would be on his way. He arrived at around 2pm with a RAC van and looked at the car and said he would have to get a pick-up truck to come out.’

Mrs Williams said Michael offered to take her home and then stay with her car himself – but was then prevented from doing so by head office.

‘He could see I was freezing cold, had two Jack Russell terriers with me, and was in a dangerous position by the side of the road,’ she said.

‘But when he phoned the office saying he could take me home he was told he couldn’t because I only had a personal policy so had to stay with the car.

‘So this young guy had offered to help but was told he couldn’t by his superiors.’

Mrs Williams waited but no one arrived and at 2:50pm got a call from the RAC saying no one would be available until 4pm.

‘I explained I was not happy,’ she said. ‘My daughter had also been in touch with them on my behalf but she was told that if I was in danger I should phone the police. She did but there was no patrol car available.’ 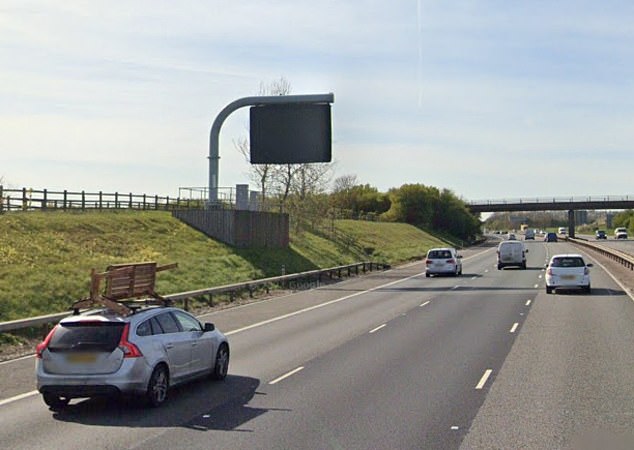 Maria Williams, 66, broke down on the M40 on February 11, and had to wait four hours (pictured is the motorway near to where she broke down)

Mrs Williams was finally picked up at 3:30pm, nearly four hours after her original call. Explaining her frustration at the RAC’S service, she said: ‘I was on my own in an unsafe position on the M40 with two dogs who were scared stiff.

‘It was a very stressful situation. I’ve been a customer of the RAC since 1984. They promise to rescue members within one hour. They said I was a priority but I obviously wasn’t otherwise they’d have sent someone out. I’ll be canceling my membership.’

Courtney Thomson, 26, had to wait for nearly eight hours on a dingy street in Tradeston, Glasgow after blowing her tire on a pothole.

She called the RAC at around 5.50pm on September 2 but it was not until 1.30am the following morning that help eventually arrived.

‘I was in a dark street that didn’t have any street lights and I was in a particularly rough area of ​​Glasgow,’ she told MailOnline.

‘At 8:10pm I called again to ask what was happening and was told that it would be about 50 minutes until someone arrived.

‘At 9:25pm I got another call to be told that no one would actually be coming out to resolve the issue with my tire… instead a full recovery vehicle would come to take away my car. 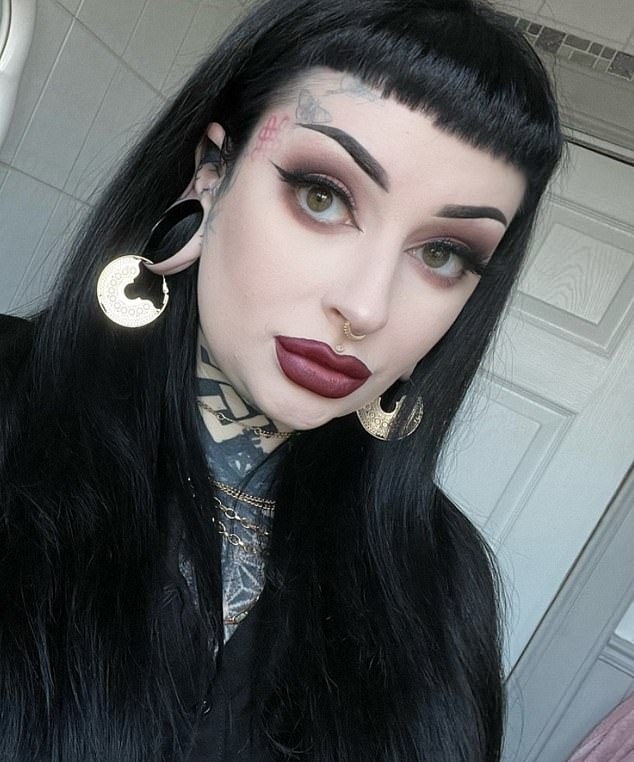 Courtney Thomson, 26, had to wait for nearly eight hours on a dingy street in Tradeston, Glasgow after blowing her tire on a pothole

‘I was annoyed, as if I had been told that hours ago, I could have gone home to wait on them.’

The RAC said a truck would come out to her between 11 and 11.30pm, but when this did not happen she called again to be informed there was yet another delay.

A recovery truck eventually appeared at around 1.30am.

‘The RAC were very unapologetic and couldn’t have cared for any less about my well-being,’ Ms Thomson, a body piercer, said.

‘I’m a 26-year-old female who was stranded in a dingy street alone, and also on the night of a football match, leaving me extremely vulnerable and unsafe.

‘I was crying constantly to them on the phone… but I was completely brushed off.’

In January, the AA was criticized by members after the breakdown firm said it did not prioritize call outs based on gender.

A member who had broken down ‘at night in the dark’ claimed on Twitter she had been told by an AA call handler that the firm treats lone women and men exactly the same because ‘that’s equality’.

Dr Helen Mott said she would then have to wait ‘alone in the dark for 90 minutes or more’ and added that the firm’s policies ‘need a revamp’.

Responding to her tweet, an AA spokesman confirmed they do not prioritize based on gender and instead ‘consider the location’, meaning they would give preference to a person broken down on a motorway over someone in a supermarket car park.

Angry members criticized the company, with one saying she was ‘cancelling her membership’ and others claiming to have had a similar experience to Dr Mott. 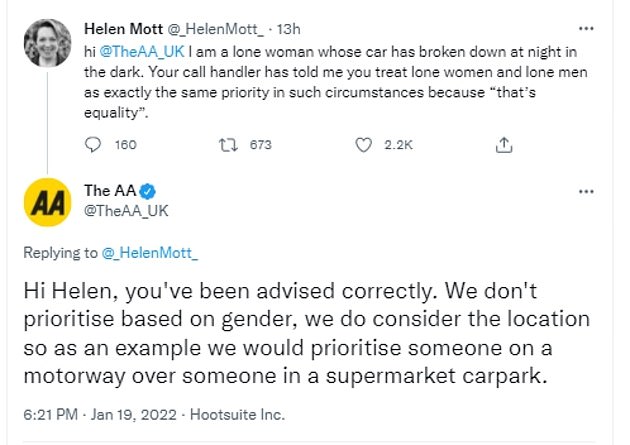 In January, the AA was criticized by members after the breakdown firm said it did not prioritize call outs based on gender

The row came after the deaths of Sarah Everard and Sabina Nessa, who were both attacked while out alone at night, and calls on the police and government to make Britain’s streets safer for women.

Today the RAC insisted it would take in all factors, including gender, to assess someone’s vulnerability.

‘Breaking down can be frightening, so member safety is always our top priority,’ a spokesman said.

‘When someone asks for our help we find out how vulnerable they are and then prioritize according to their situation.

‘It might be that women are more likely to feel vulnerable at the roadside than men, and this is something we would always take into account.’

Asked about Ms Thomson’s case, the spokesman said: ‘We’re really sorry we didn’t get to Courtney as fast as we would do normally, but unfortunately we were extremely busy that evening.

‘We’ve rung her to apologize and we’re pleased to say she’s accepted a gesture of goodwill and is still a member.’

The RAC said it would also contact Mrs Williams to ‘discuss a suitable gesture of goodwill’.