If your dog is ultra-friendly, they might have trouble establishing themselves in the presence of other canines.

That is according to researchers in Hungary, who quizzed hundreds of people who owned at least two dogs.

Results showed that friendlier dogs are lower down the pecking order in multi-dog households.

Dogs that are more extraverted, conscientious and open rank higher in the hierarchy, while more agreeable and affectionate dogs generally rank lower, they found.

In addition, older dogs tend to dominate in multi-dog households, according to the findings, which suggest dogs may get more authoritative as they mature. 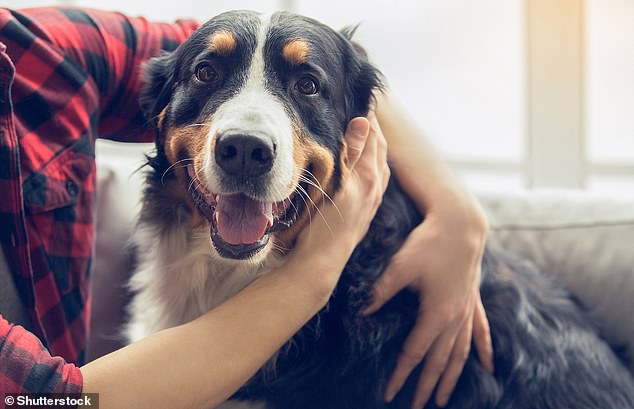 Dogs that are more extraverted, conscientious and open tend to rank higher in the hierarchy, while more friendly dogs tend to rank lower. In addition, older dogs tend to dominate in multi-dog households, according to a recent study from the Department of Ethology at Eötvös Loránd University (stock image)

– Neuroticism: Uncertainty, more aggressive towards strangers and other dogs

– extraversion: Dogs that go bounding though life and seek interactions with new people

– openness: Curiosity to the environment and enjoyment of sensory experiences

– conscientiousness: Being reliable, thorough and efficient in tasks, determined and not easily distracted

The new study was conducted by experts at the Department of Ethology at Eötvös Loránd University in Budapest, Hungary.

‘We assessed the association between the personality and social rank of companion dogs,’ say the team, who did not look at differences between breeds for the study.

‘There is a complex association between owner-perceived dominance and personality in group-living companion dogs.

‘Personality of individuals in a multi-dog setting could affect the group-hierarchy.’

The team designed an online survey for owners of multiple dogs to assess two factors – firstly, the dominance relationship between co-habiting dogs via their everyday interactions, referred to as the ‘dominance score’.

Dominant dog behavior can include more offensive moves and less ‘self-handicapping’ (inhibiting their own abilities to match those of a weaker partner) during play fights.

Secondly, the team assessed dogs’ individual personalities using the Big Five personality traits – the most commonly used model of personality in academic psychology for humans, but also for other animals. 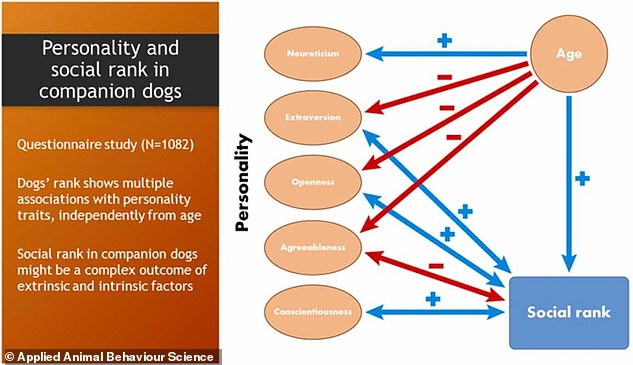 DOGS GET WORSE SEPARATION ANXIETY WHEN WITH ANOTHER POOCH, STUDY FINDS

If your dog experiences separation anxiety, getting another pooch might not be the answer to keeping them happy, a recent study suggests.

Academics in Switzerland fitted dog-owning homes with cameras to monitor canine behavior – some in the company of another dog – when their owners were away.

They found that barking (an indicator of separation anxiety) was more common in multi-dog households compared to single-dog households.

Physical activity (another potential indicator that can lead to destructive behaviour) was also higher in multi-dog households, primarily in the first hour of separation.

Read more: Dogs get worse separation anxiety when with another pooch

In all, researchers analyzed the entries of 1,082 dogs from around the world. All were companion dogs – in other words, dogs that provide companionship as a pet, rather than usefulness by doing specific tasks.

The only criterion of the questionnaire was that the participating owners had to have more than one dogs living together.

Researchers only included the data of dogs more than one year old, because both personality and social behavior still rapidly change in puppyhood.

In other words, more extroverted, open and conscientious dogs had a higher social rank.

As for the fourth trait, the more agreeable or ‘friendly’ dogs scored lower on dominance, the team found.

Meanwhile, the team found no association between dominance and the fifth trait – neuroticism – at all.

The researchers also confirmed the association between dogs’ age and their dominance rank.

Similarly to previous studies they found that older dogs are more likely to be dominant.

‘As personality can slowly change with age, we needed to check whether our results still hold regardless of age,’ said study author Kata Vékony.

‘We found negative correlations between age and extraversion and age and openness while these traits have positive associations with rank.

‘Agreeableness had a similarly negative correlation with age and a negative association with the dominance.’ 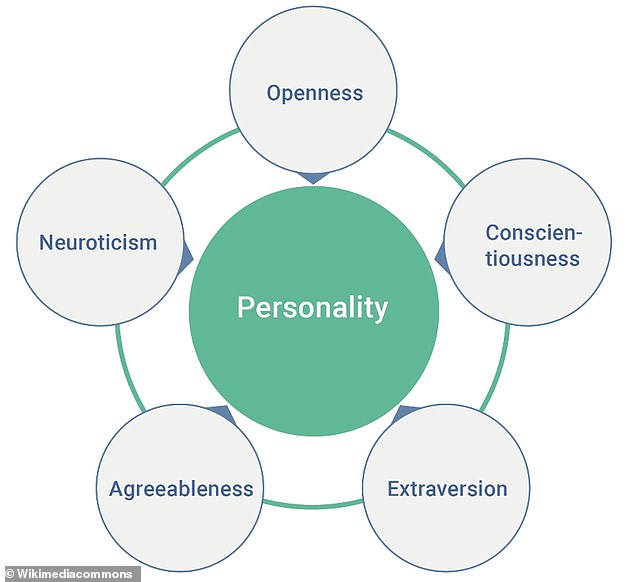 Several different experiences, many of which are not related to competitive situations, are involved in the development of personality traits of dogs, the researchers say.

The team admits that their study cannot clearly conclude that certain personality traits cause dominance, and so further research is needed to accurately identify causality.

They also argue that ‘dominance’ is not a personality trait like the traits of the Big Five are, because ‘the core idea’ behind personality is that it is relatively stable across time and various contexts, while dominance can change.

‘While our results support the notion that dominance is not a separate personality trait in dogs, further research is needed to discover, what causal relationships may exist between personality traits and rank,’ said study author Péter Pongrácz.

The study has been published in the journal Applied Animal Behavior Science.

THAT’S PAW-SOME! DOGS ARE MIND-READERS AND CAN TELL IF A HUMAN HAS DONE SOMETHING ON PURPOSE OR WHEN THEY’VE MADE A MISTAKE, STUDY FINDS

Dogs have basic mind-reading abilities and can tell whether or not human actions are intentional, a 2021 study shows.

Researchers in Germany compared dogs’ spontaneous reactions to intentional and unintentional human behavior with pieces of food passed through a glass barrier.

They found dogs responded differently depending on whether the actions of the experimenter were deliberate or not.

The results suggest dogs can master a basic component of the Theory of Mind – the ability to read others’ intentions – which was previously regarded as uniquely human.

Researchers wanted to know if dogs have one of the basic components of Theory of Mind – the ability to tell the difference between something done on purpose and something done by accident.