A former BBC journalist has spoken of his heartbreak after his beloved pet dog died aged 15 after catching a vomiting and diarrhoea bug affecting hundreds of dogs across Britain.

Rory Cellan-Jones, 63, revealed that Cabbage the collie cross caught ‘the gastroenteritis bug which has affected many London dogs’ at the start of the year, leaving the animal ‘miserable, finding no joy in life any more’.

Mr Cellan-Jones drove her to the vet on Friday morning to be put down, and the former technology corresponded ‘stroked her as she quietly slipped away’.

Cabbage had been the center of a Twitter campaign in November when her walker’s van was stolen in Acton, west London – but she and five other dogs were tracked down in the abandoned vehicle.

Despite being slightly blind and very deaf, the dog had been very cheerful until her sudden illness – even after she went missing, Mr Cellan-Jones wrote in a tribute to his pet which he published with the title ‘Farewell Cabbage’.

It comes amid mystery over reports of hundreds of dogs experiencing vomiting and diarrhoea symptoms – with cases in Hayling Island beach and Langstone Harbor in Hampshire, Fraisthorpe Beach in East Riding, Bridlington and Redcar beach.

The British Veterinary Association has described the illness as a ‘gastroenteritis-like bug’ which has been ‘uncommonly violent’, and despite initial reports suggesting it was spreading across the country’s beaches, cases have now been reported inland.

Following the public outcry over the dogs falling ill, the Department for Environment, Food and Rural Affairs (Defra) said that it was aware of the incidents and was communicating with the Animal and Plant Health Agency.

Recounting his beloved companion’s final days, Mr Cellan-Jones told BBC Radio 4’s Today program this morning: ‘She went off her food, needed carrying up and down stairs and her back legs kept giving way when she tried to stand. 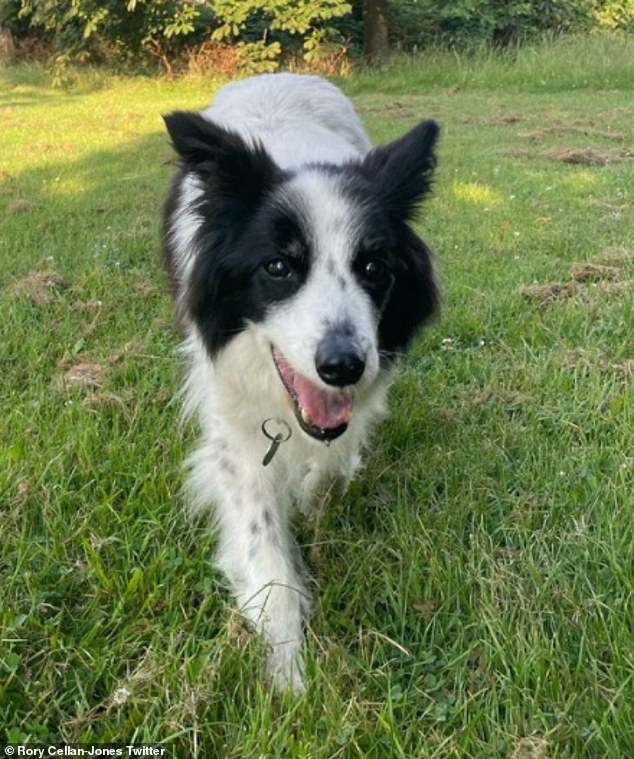 Rory Cellan-Jones, 63, revealed that Cabbage the collie cross caught ‘a gastroenteritis bug which seems to be affecting many dogs’ at the start of the year, leaving the animal ‘miserable, finding no joy in life any more’ 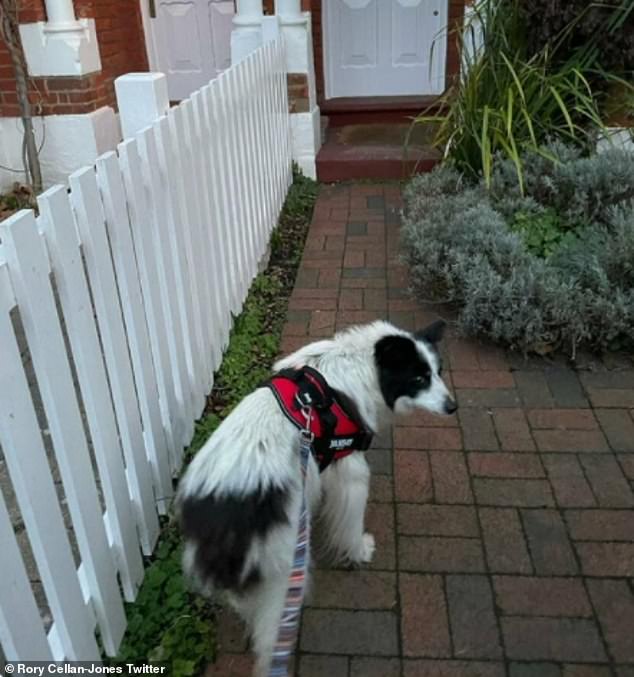 Mr Cellan-Jones drove her to the vet on Friday morning to be put down, and the former technology corresponded ‘stroked her as she quietly slipped away’ 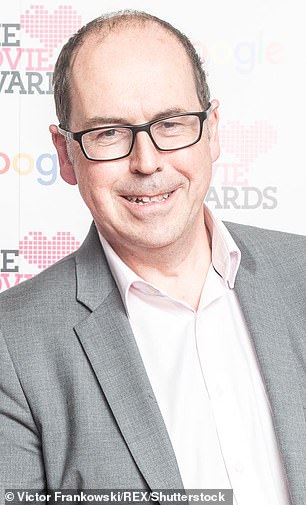 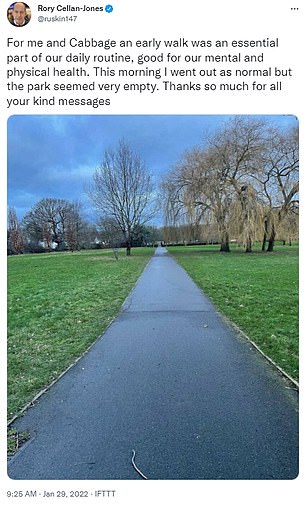 On Saturday Mr Cellan-Jones (pictured left) tweeted: ‘For me and Cabbage an early walk was an essential part of our daily routine, good for our mental and physical health. This morning I went out as normal but the park seemed very empty. Thanks so much for all your kind messages’

A pet owner revealed that her dog was left ‘lifeless’ and ‘limp’ after a walk by a canal, amid a spate of dogs falling ill with a mystery bug this month.

The dog was left fighting an infection in his body for five days following the walk, which nearly killed him.

Nicola had also been walking a friend’s dog at the time who also became ill, though it managed to recover within a day.

She said that both dogs started showing symptoms within four hours of the walk and ‘seemed off’.

It comes amid reports of hundreds of dogs experiencing similar symptoms, sparking warnings from vets to avoid coastal walks.

Cases of dogs falling ill have been reported at Hayling Island beach and Langstone Harbor in Hampshire, Fraisthorpe Beach in East Riding, Bridlington and Redcar beach. 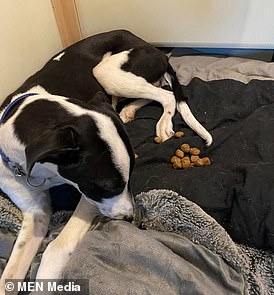 Speaking about her lurcher’s battle with the mystery illness, Nicola said: ‘On day 3 he started to perk up, I thought the worst of it must be over and he was getting better like my friends dog.

‘I was still concerned but his food started staying down so I thought he must have been on the mend.

Nicola had read the stories online about what was going on at the Yorkshire coasts.

She added: ‘I woke up around 3am on night four, and just thought I was losing him. I thought he was dead, he was shaking and being sick, he was limp in my arms I thought he wasn’t coming back from this.

‘At that point in the night I took him to the emergency vet, I was really shocked with the numbers that were there. I was terrified.’

‘Worst of all she seemed miserable, finding no joy in life anymore.

‘After a conversation with an extremely sympathetic vet, we decided it was time to let her go. We stroked her as she quietly slipped away. We are of course devastated.

‘Cabbage was such a sweet-natured animal and had been part of our family ever since we picked her up from the Dogs Trust rescue home in 2007.

‘I find myself taken back by the extent of my grief.’

Cases of dogs falling ill had been reported on UK coastlines, with cases now said to have been found inland too.

The British Veterinary Association said this month that the illness was likely to be a virus, which results in ‘gastroenteritis-like symptoms’, including diarrhea and vomiting.

They said they are aware of reports, but added there is currently no evidence linking walks on the beach to the bug.

BVA President Justine Shotton told MailOnline: ‘We’re very sorry to hear about this case. Vets see gastroenteritis cases in dogs relatively commonly in practice and the vast majority are mild, with the animals just needing time or some supportive care to make a full recovery. Sadly, in very rare situations, it can lead to secondary complications or even death.

‘At this time, we can’t speculate on what might be causing the symptoms in the cases being reported from Yorkshire and other parts of the UK. While pet owners are understandably worried, the spike may be part of a normal increase in gastroenteritis that vets see during the colder months.

‘Our advice to concerned owners is to contact their local vet for prompt treatment if their dog shows any signs of illness, such as vomiting and diarrhoea.’

Although many cases are more mild, there is a risk of serious illness, as happened to Duke. Dog owners are advised to contact their vets if they spot any of these symptoms.

Cabbage had a bout of a gastroenteritis-like bug a few weeks ago and had spent some time in the ‘doggy hospital’.

Cellan-Jones shared a photo of Cabbage on Twitter on Saturday morning, writing: ‘For 14 years she was a lovely, energetic and really smart member of our family.

‘It was time for her to go but we miss her so much.’

Cabbage already had an online following before she was stolen because Cellan-Jones regularly documented their early morning walks with pictures posted to his feed.

‘At the beginning of lockdown, actually posting a picture of a day was a kind of therapy for me, because the walk was the only thing that was allowed,’ he explained.

‘(I think) it kind of reminded (people) everything was OK with the world when they got up.’

He thanked his followers for their support, adding that the park on his daily walk this morning ‘felt empty’.

‘So sorry to hear that Rory,’ Walker replied, while Raworth said she ‘loved Cabbage’s adventures’.

Cabbage went missing after her dog walker left his van’s engine running with the key in the ignition in west London and it was stolen.

Cellan-Jones quickly appealed to users online for any sightings, garnering thousands of likes and retweets.

‘Something terrible has happened,’ he wrote at the time.

‘Our dog walker’s van with our dog Cabbage in it has been stolen while he was picking up another pet… Please look out for a black Ford Transit.’

After hearing the story, Ford’s press office got in touch to alert the dog walker that the van had a feature which enabled drivers to track the vehicle through an app.

‘Ford would not have known about this before the age of social media,’ Cellan-Jones said.

The van was located in Park Royal, around a mile-and-a-half from where four of the dogs were soon found, with the other two located the same evening.

More than 60,000 Twitter users celebrated Cabbage’s safe return by liking the former journalist’s celebratory tweet and photo of his dog back home.