Emma Talley flew to Singapore over the weekend to summarize the LPGA season, but her heart is never far from Princeton, Kentucky. It’s a friendly, hope-filled community with four stoplights and a big sign that says “Home of Emma Talley” on the way into town. When Talley, 27, earned her card for the 2018 season, a 5-foot-wide photo of her went up in the local Wal-mart.

Talley was on the other side of the world in New Zealand when a devastating tornado ripped through her beloved Princeton on December 10, 2021, with winds up to 190 mph, causing widespread destruction.

Talley’s parents’ house was fine. A piece of metal went through one of the windows but nothing major. The Talleys live on the 16th hole of Princeton Golf and Country Club, and they rode out the storm in the basement of club president Fred Foltz, who lives up near the 16th green.

While the Talley’s Greenspoint neighborhood didn’t take a direct hit, many families in the golf course’s other community, Country Club Hills, lost everything.

“My parents have survivor’s guilt, to be honest,” said Talley, who was able to stream the local news from the Southern Hemisphere. While Talley was eager to get home to help, her mom told her to stay put. Someone might need her bedroom from her. 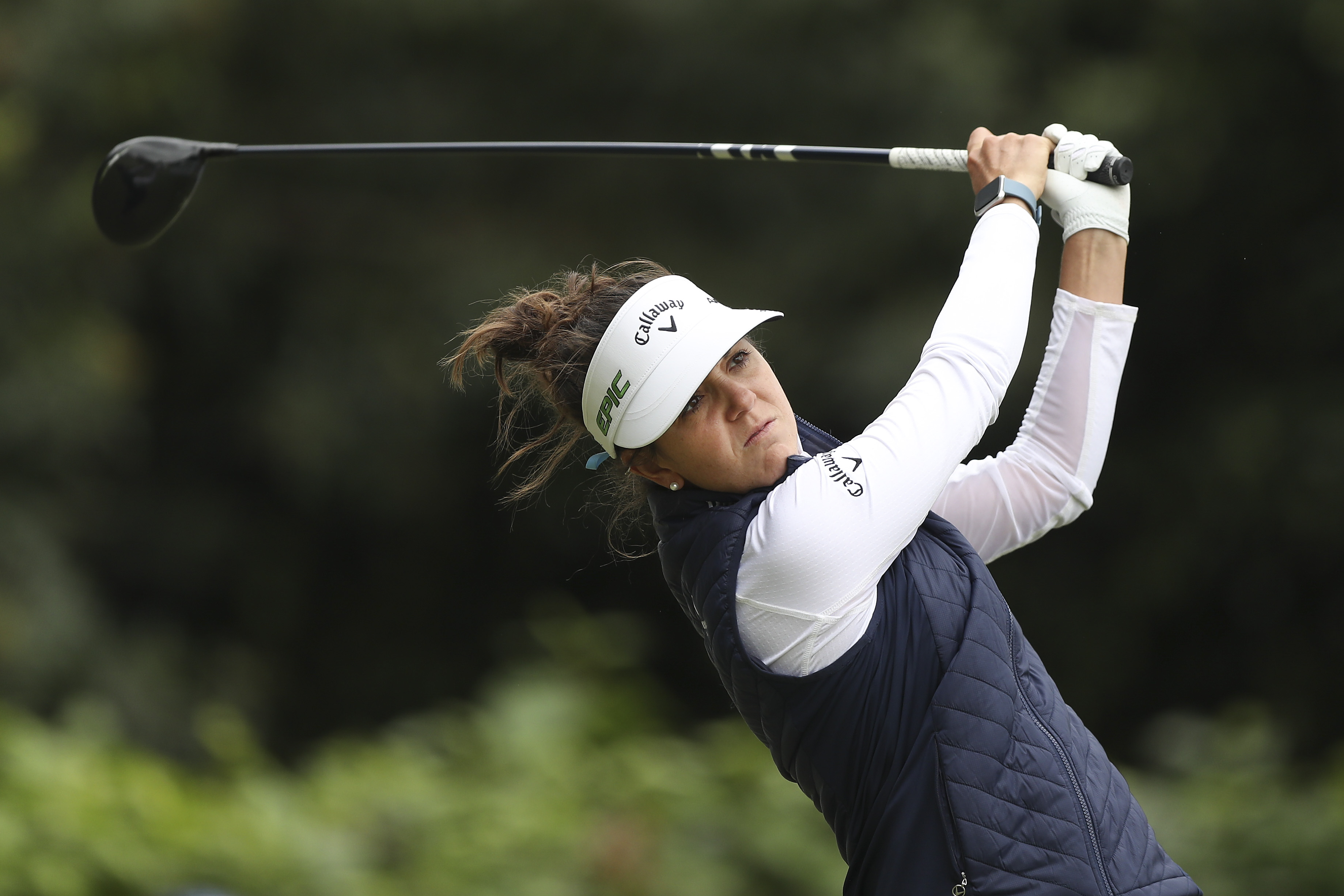 Emma Talley plays her shot on the 10th tee during round two of the HUGEL-AIR PREMIA LA Open at Wilshire Country Club on April 22, 2021, in Los Angeles, California. (Photo by Meg Oliphant/Getty Images)

Brandon Knoth, a local attorney, had lived on the second hole at Princeton for seven years with his wife and three children. He’s the girl’s golf coach by default at Caldwell Country because middle daughter Claire is the school’s only player.

Knoth was in the corner of the basement on the couch with one daughter under each arm when the tornado hit. Their ears popped from the pressure and the roar was so loud they couldn’t hear their house being torn apart above.

If he’d known the severity of what was about to happen, Knoth would’ve brought their three dogs down with them. When they went up to survey the damage, the garage was gone along with the dogs. Miraculously, two of the dogs came back, but their youngest, a one-year-old English Cream Retriever named Basil, didn’t survive.

Knoth’s wife and eldest daughter immediately flew back from a Miami birthday trip to find utter chaos. Some of the walls were still standing on the first floor but besides a few clothes from a dresser, most of it was gone. There was a washing machine in the yard, but it wasn’t theirs.

Residents scoured the golf course picking up belongings that were scattered about – shirts and ties and pictures. The Knoth’s sliding glass door blew out in the living room and their recliner flew across the course, but somehow the Christmas stockings – in that same room – were still hanging on the mantel.

“We had just finished renovating our house,” said Knoth. “We loved it, and never planned on leaving it.”

While the EF4 tornado was the deadliest on record in Kentucky with 77 deaths, incredibly, not one in the Princeton community died. The latest census put the population of Princeton at 6,270. 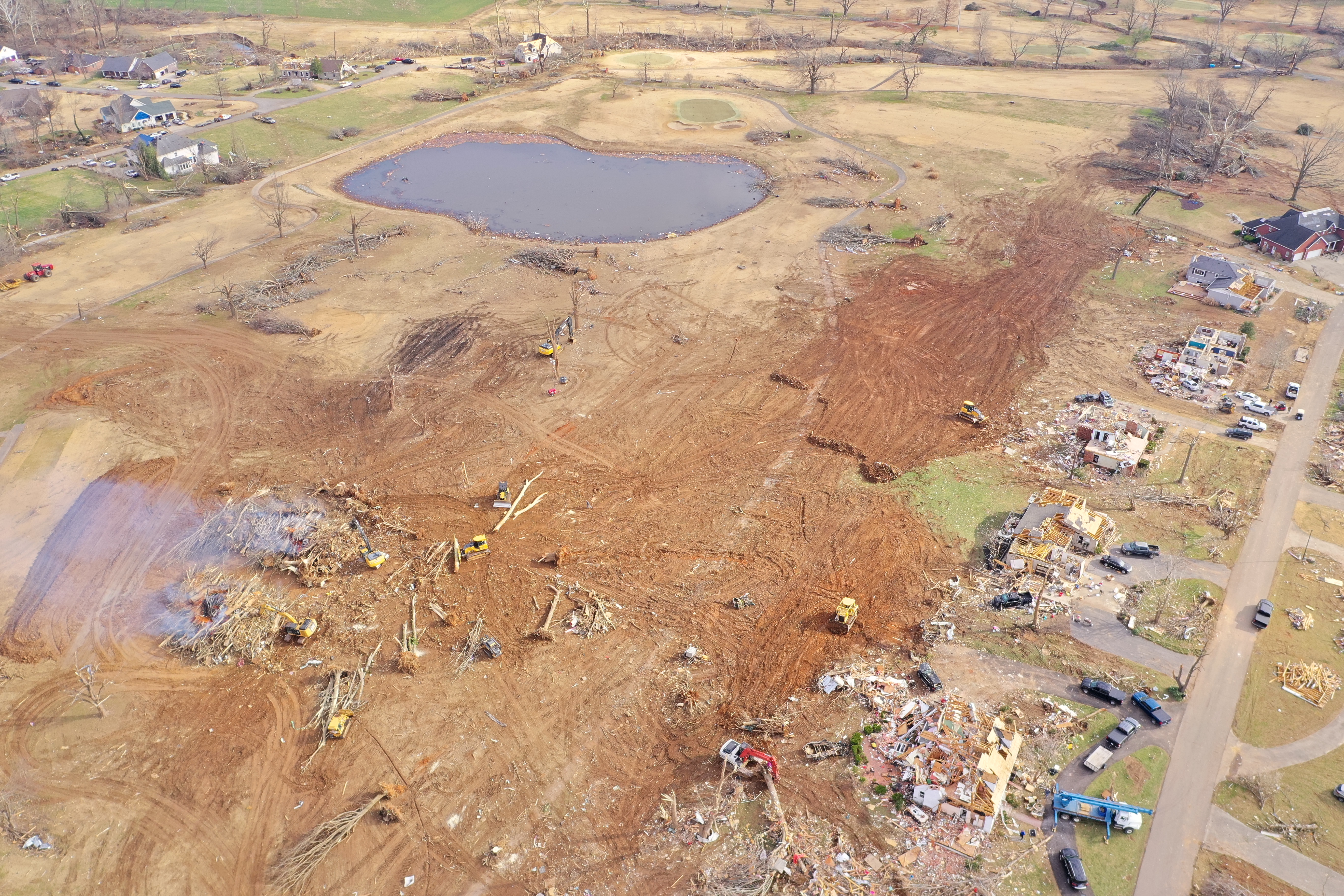 Mayor Dakota Young said 62 homes have been demolished in Princeton and that number is expected to rise to as many as 70 by the time insurance reviews are settled. Foltz said at least 40 of those homes are located in the golf course community.

Talley shared a GoFundMe link on her social media accounts to try and help raise funds. Fellow Kentucky native Justin Thomas joined her in raising awareness, as did top American Nelly Korda. To date, the Caldwell Chamber Tornado Fund has reached $155,737 of its $200,000 goal.

Emma’s father, Dan, the town’s optometrist, was prepared to pay out of pocket for contacts and glasses for Princeton residents before his supplier came through with help. Ella’s mother, Jennifer, helped sort through the debris to find clothes she could take back to her house to wash over and over. The Talleys slow one of their cars to a friend. Two families are currently living in their home in Princeton while they winter in Florida.

“People need help,” Talley said. “There’s not much else to say other than that.”

Emma and Mayor Young grew up together in Princeton and graduated from the same class. Emma’s mom used to bake a chocolate chip pound cake, Young said, when he would come over to the house to study biology.

Young graduated from the University of Kentucky with a degree in economics and, at age 24, became the major of Princeton. Talley said he’s a big reason why the town’s clean-up efforts moved so quickly.

The tornado hit on a Friday. Young said he reached out to the golf course on Saturday to inquire about using some of their property as a landfill, given the shortage of space in the area.

“They did not hesitate,” said Young, who set a goal of 45 days to wrap up major cleanup efforts. They finished in 43. 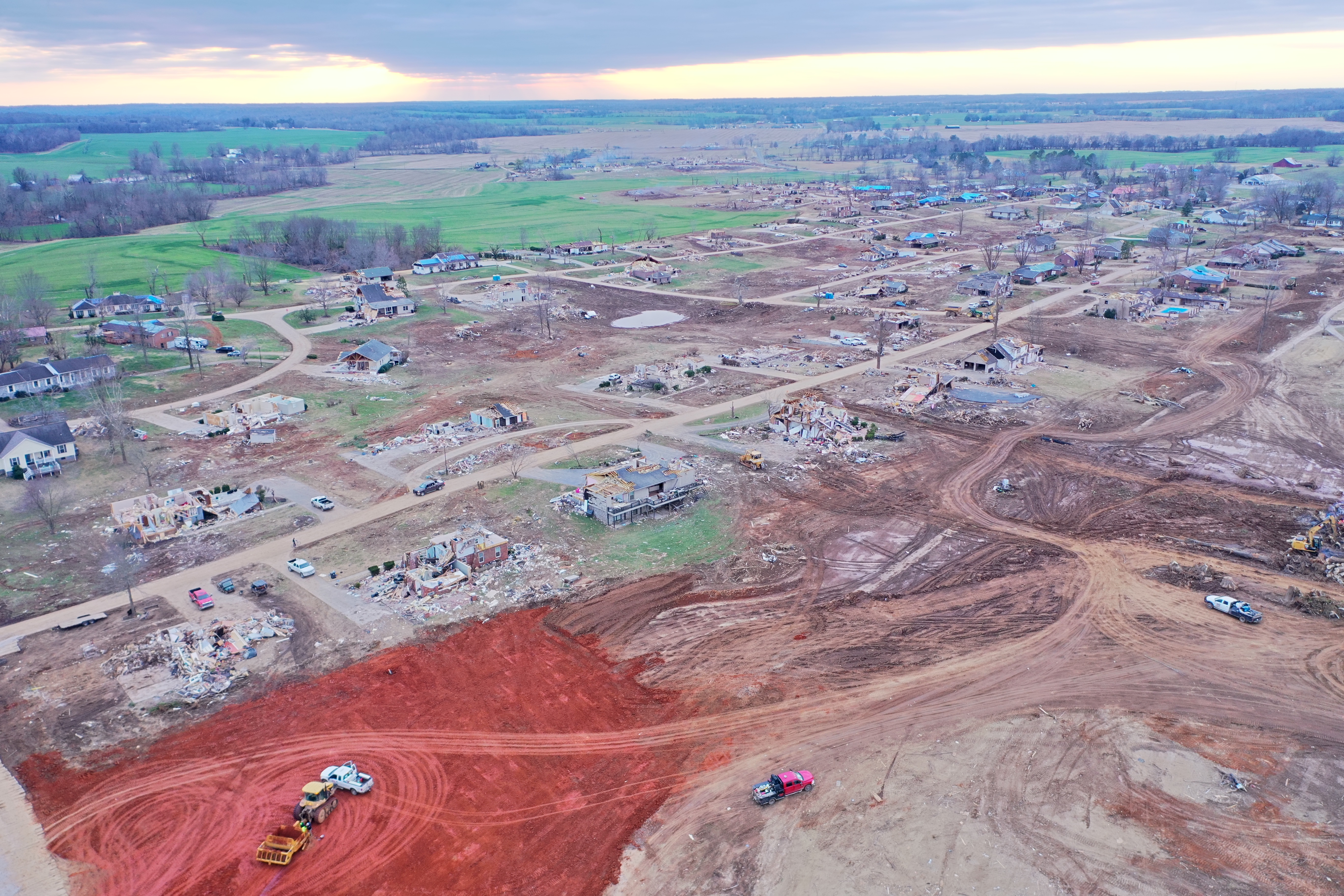 The landfill is about an acre in size and has 60 complete houses buried inside along with innumerable garages, sheds, and roofs from other properties. Built into an existing hillside, it blends well into the current landscape and doesn’t interfere with any existing golf holes. Young called it a godsend.

“You wouldn’t guess there was a landfill there,” said Foltz, “ever.”

Knoth said the tornado stretched at least eight houses wide. That’s how many in a row were pulverized on his street by him.

The Knoths are trying to make plans to rebuild on that same lot, and their new house would sit near their old house, now covered beneath the earth.

“It will be buried right there behind us forever,” he said. 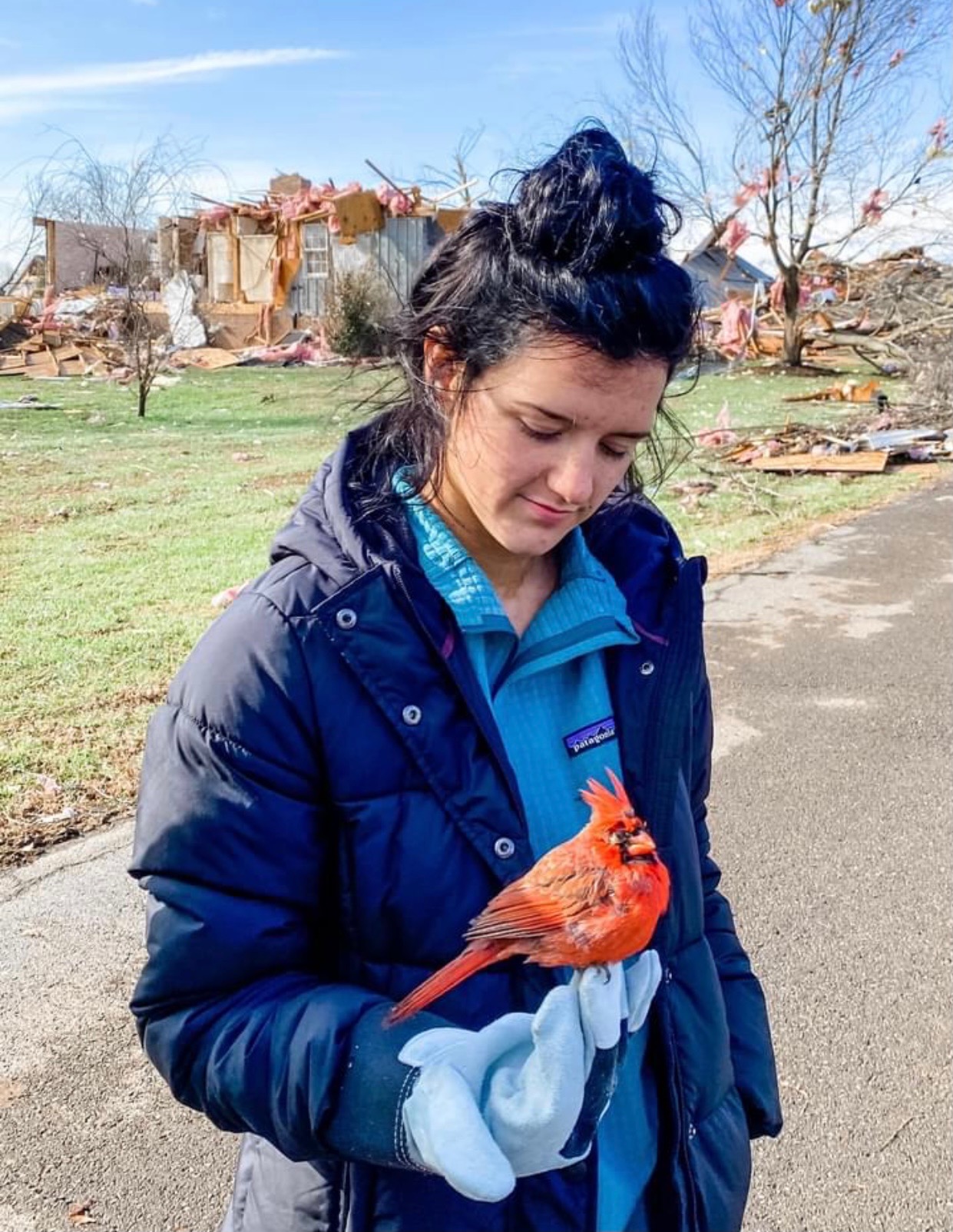 A cardinal rests on the hand of Claire Knoth the morning after a tornado destroyed the family’s home in Princeton, Kentucky. (Photo: Tara Miller)

Mercifully, downtown Princeton was spared. Residents still go to work and school every day. Some just don’t have a place to stay in town anymore as they wrestle with outrageous building costs. With construction costs up nearly 20 percent, many in Princeton find themselves unable to rebuild what they lost.

Golf course superintendent Lee Childress lives about 30 minutes away from Princeton and said the tornado skirted about 15 miles south of his home. He had no damage. The next morning he drove to the golf course, taking spare clothes and a generator to an employee who lives on the course.

Childress, a fine player in his own right, has been superintendent of the local club for three years now, and Foltz said the course was in the best shape he’d ever seen since he joined more than 40 years ago. Sadly, only four holes were unaffected by the tornado. Flying two-by-fours, Foltz said, did significant damage to the greens.

The first nine holes at Princeton were designed by famed architect Perry Maxwell in the 1930s, and trees were the main source of protection against low scoring, given that it tipped out at about 6,600 yards. With close to 300 trees lost, they’ll have to get creative with long grass. 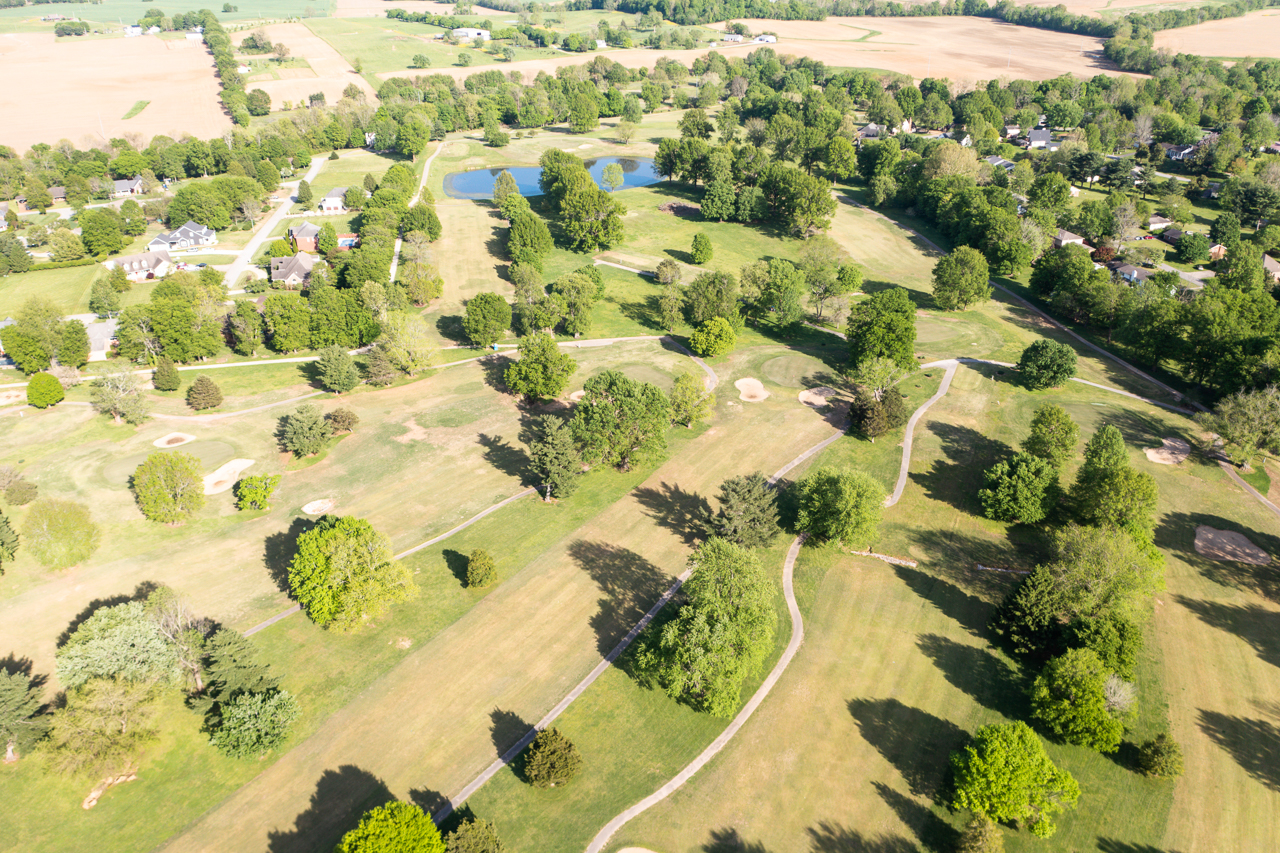 Princeton Golf and Country Club, before the tornado. 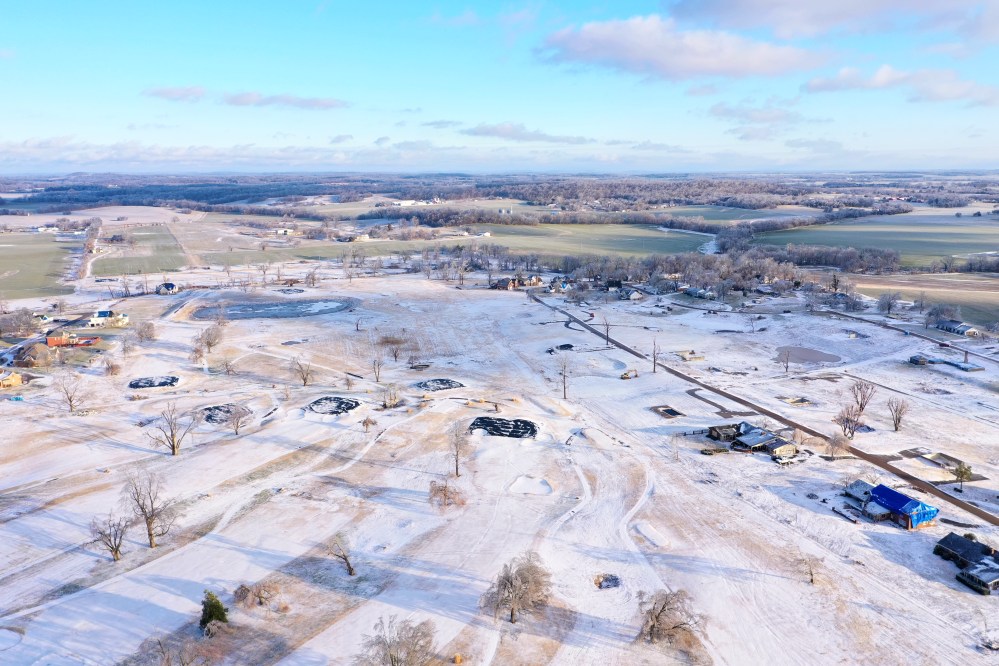 Princeton Golf and Country Club, after the tornado.

“That was probably the most impressive thing, in a bad way,” said Childress. “The force of Mother Nature being able to pull up a full-grown oak tree out of the ground and move it 5 yards.”

They’d hoped to open nine holes in March, but damage from an ice storm moved that start date back to early April.

“Hopefully that front nine can be a sanctuary for people,” said Talley.

Everyone in the Knoth family had a set of clubs, and they kept two golf carts at the house. They still haven’t found one of the carts, but the other one was lying upside down on a heap of rubbish. Someone said to Knoth: “I bet that thing will still run.”

The cart didn’t have a seat or a top, but Knoth put a piece of plywood down and hit the gas one day and it took off like a bullet.

“It’s Lightning McQueen,” said Knoth, referring to the main character in Pixar’s “Cars” movie. “We joke that it got hit by lightning.” 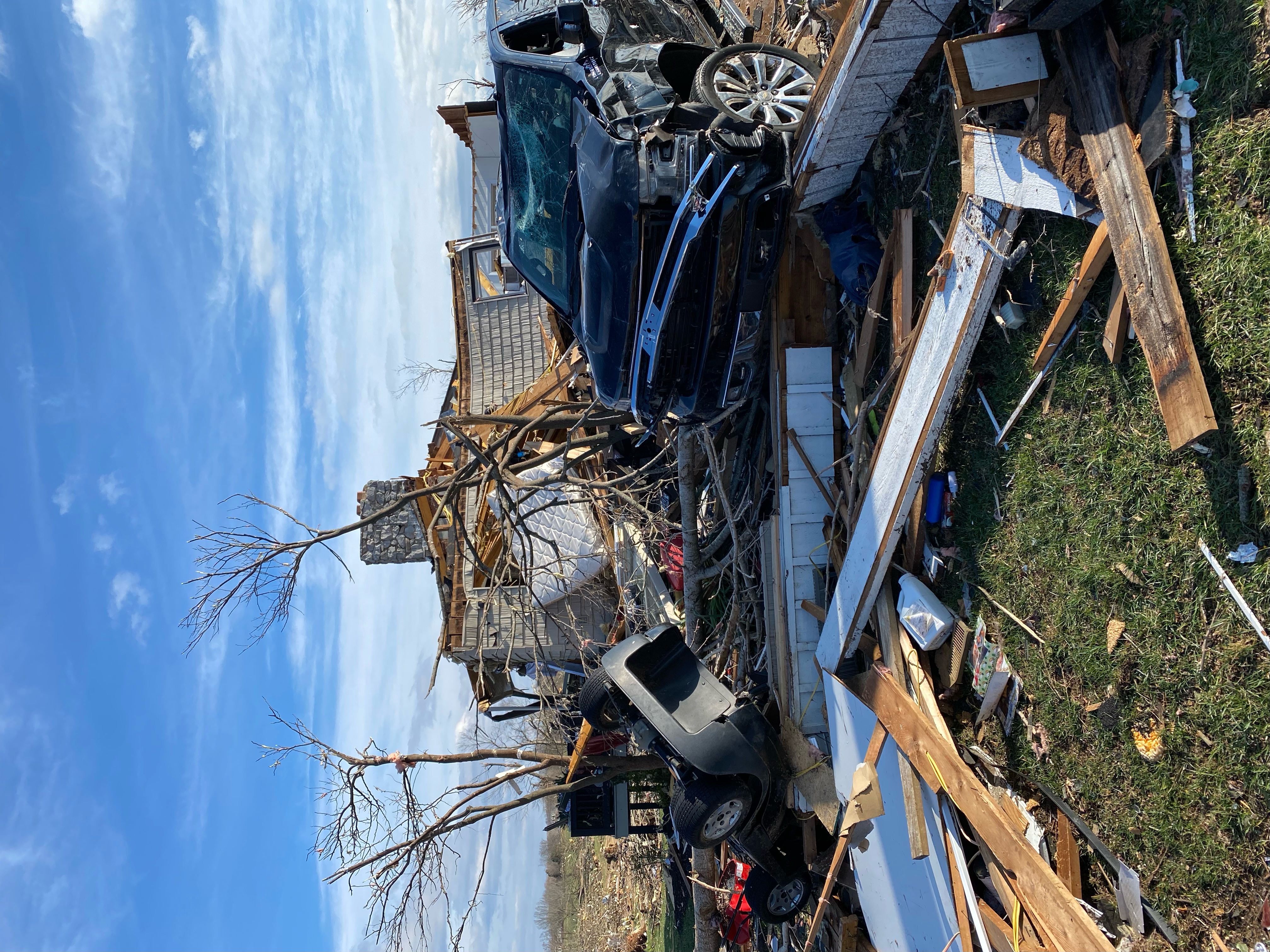 During her first tournament of the year on the LPGA, Talley donated money every time she made a birdie to help Princeton. Later this year she plans to help with a fundraising event in Paducah, Kentucky, that would benefit rebuilding efforts in Princeton and surrounding areas.

Before boarding a plane bound for Asia, Talley live-streamed her high school’s district basketball game. She keeps up with Princeton just as the town keeps up with her. There’s a monument of sorts dedicated to her on the first tee at the country club. Members hope to have all 18 holes open by late summer. Lee said their greatest area of ​​need right now is manpower.

“Everything was shattered,” said Childress. “We’ve got to go around and almost handpick shingles and small debris that we can’t pick up with any type of equipment.”

Talley feels a renewed energy about her golf game this season. After having to rebuild her swing from her last year, she’s not shy about stating her goal of making the US Solheim Cup team next year in Spain. No doubt there would be a viewing party at the club. Any excuse to celebrate and support one of their own.

“I think that’s the cool thing about a small town,” said Talley. “There’s a lot of hope.”