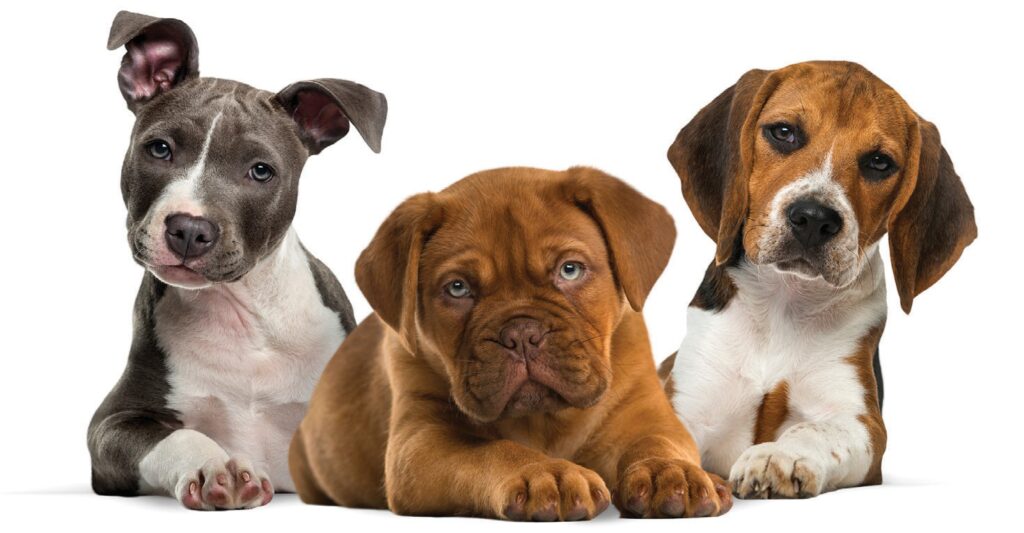 What you have is a puppy. What you want is a dog. It can take a while to get from one to the other.

When Terry Albert’s Labrador retriever Tank was 10 years old, a friend commented, “He’ll be a great dog when he matures.”

When does that happen? It’s the $64,000 question. The age at which dogs mature is, well, nobody knows, really. The usual answer is 18 to 24 months. Puppies spend those first two years maturing physically, but it can take a while for their brains to catch up. Breed, age at spay or neuter, training foundation and individual temperament are all factors.

And we can get so used to wild and crazy puppy antics that when our dogs start to settle down — if they do — it can come as a shock. First-time dog owners especially may worry that something is wrong with their pups. Here’s what to expect when—or if! — your puppy becomes an adult.

The process of a puppy reaching maturity is a physiological phenomenon, but it’s also brought on by environmental stimulus, says veterinary behavior specialist Debbie Horwitz, DVM. “So what you encounter during that time is going to affect how you behave,” she says.

Puppies acquired over the last two years haven’t necessarily had the same experiences that previous puppies had growing up. They may not have been to puppy kindergarten or spent much time sitting outdoors at a crowded coffee shop or visiting other establishments. Those pups may respond differently to new people or experiences than pre-pandemic puppies.

Training can affect when puppies mature. Dogs in training for detection work or to be service dogs start to become a little steadier between 18 months and 2 years of age, Dr. Horwitz says. “It takes a while to train dogs to reliably do things,” she says.

That’s true for companion dogs, too. What Dr. Horwitz calls behavioral leveling usually occurs when dogs have become familiar with their environment and know what’s expected of them. They’re less distractible, more able to settle on their own.

Breed and individual temperament matter, too—maybe most of all. The age at which dogs start to melt varies wildly. “Studies say between 12 to 36 months, but that is a big range. I see it clinically around 2 years for larger breeds,” says Kathryn Primm Gressett, DVM.

Dogs from working lines, whether they’re sporting breeds or sled dogs, tend not to get serious or to slow down for years. Flat-coated retrievers, for instance, are nicknamed the Peter Pan of dogs. If they get a grown-up brain at all, it’s not until they’re 5 or 6 years old. Labradors have a similar trajectory.

Shelties and collies start to chill out when they’re 12 to 18 months old, but for Australian shepherds and border collies, 2 to 3 years tends to be the magic age, owners say.

“I think that USPS lost his adulthood,” says owner Rebecca Barocas. “Some days I fear I will be living with a 100-pound exuberant puppy forever. His breeder says at 3 years, his adulthood of him, like magic, will arrive.

Toy breeds such as cavaliers might calm down at a young age — or they might retain a puppy brain throughout life. One, who shall remain nameless, was raiding leftovers on picnic tables at the ripe old age of 8 years old.

Sometimes memory is at fault. Dr. Horwitz has friends in their 70s who recently acquired a springer spaniel puppy. “It has been years since they’ve had a puppy,” she says. They love Wrigley, who’s 15 months old, but they’re surprised by his energy level.

“We had Labs. They weren’t like that,” they told Dr. Horwitz. She reminded them that they had two children at that time. They all wore each other out. But she can tell Wrigley is starting to calm down: “In another six months, they might be saying, ‘What’s wrong with Wrigley? He’s so quiet when people come over.’”

So take heart, new puppy owners. Your pup will (probably) get a grown-up brain one of these days. ¦